A downloadable game for Windows, macOS, and Linux

This is a roguelike/strategy game based in fantasy world populated by mythical races and creatures. Your main objective is to assemble an army big enough to conquer a certain city, and defeat the monsters guarding paths and treasures in the process. The game proceeds in two modes: the resource management-focused roguelike adventure, and the turn-based tactical combat remotely resembling chess - hence the name Wizard Chess.

For those who had the pleasure to play Heroes of Might and Magic 2 & 3, this game should look rather familiar - it's essentially a single-faction single-hero version of HMM. There were a couple of aspects of HMM that I wished were different: the lack of realism (magic and realism, lol) around army supply lines, and the lack of nuance in battlefield positioning. This game is my attempt to address both.

Last but not least, this game literally wouldn't look the same without the tiles, so here comes the attribution: Nevanda Nethack and David Gervais.

Bring up the help menu on adventure map, battlefield, and city screens by clicking "?" on either your keyboard or bottom right corner of the graphical interface - it explains *cough* everything.

Happy playing! Drop your winning screens in the comments :)

The game lets you submit your result when you win, and the leaderboard can be found at http://www.heroicage.info/wizard-chess

Windows executable and unpacked Linux executable should run as-is. For Mac, right-click on the unpacked file, click Open, and click Open again on the new prompt. 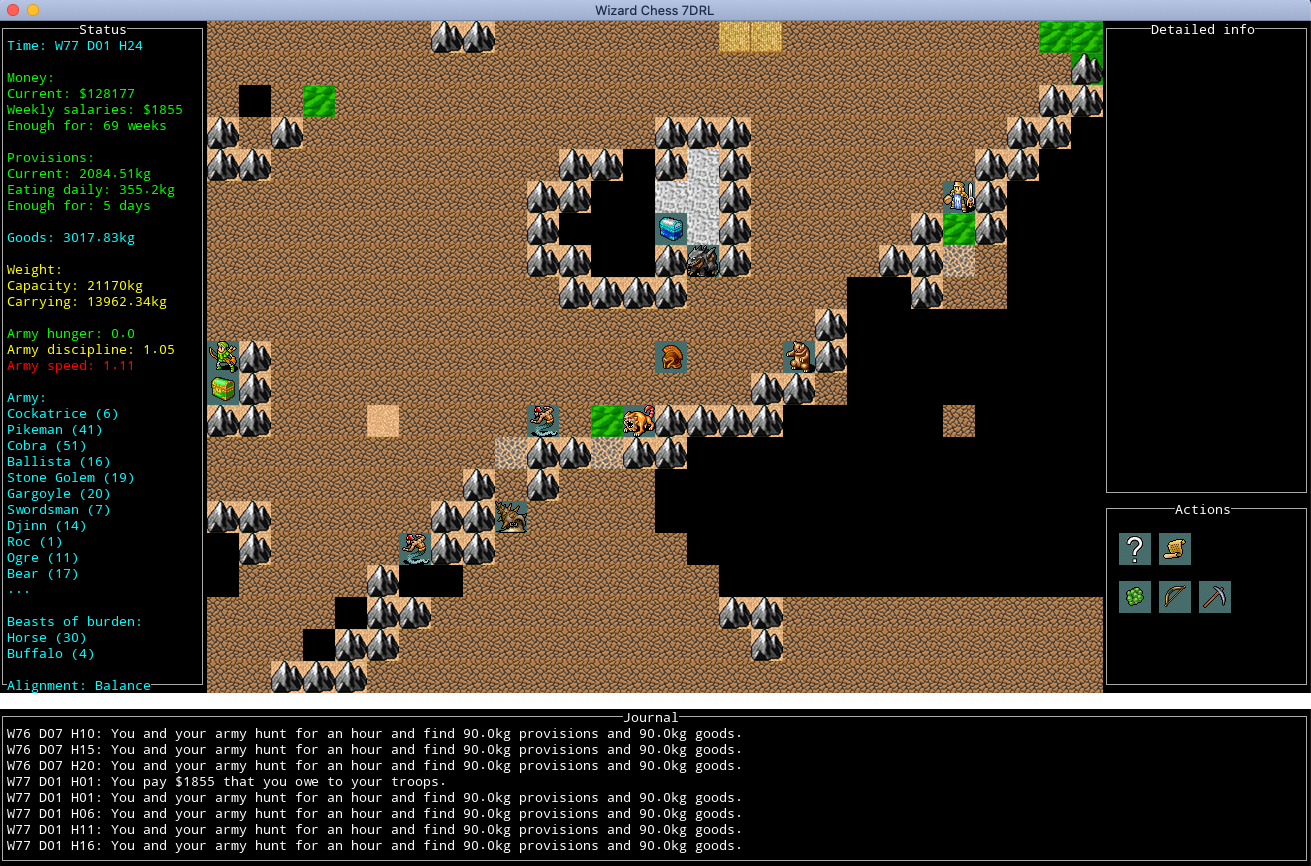 Really fun playthrough. I'm new to the 7DRL genre and did not realize that as I spend time amassing massive amounts of wealth, that the enemies were also amassing their armies. Ended up dying in the final battle after 100 weeks or something crazy but this is the last screenshot I had.

The battles are really fun, although I feel like flying units are OP. Will play again

Woo thanks for playing! This is the most money I've seen anyone amass :D

Flying units are better, but you also have to pay premium for them! Also some units that have better stats possess worse initiative, resulting in less turns in battle.

I forgot to screenshot again, but I did it! My army had Order as an alignment and I ended up finding 2 angels for hire early on and was able to rush down everything with them without ever losing either of them.

I got rank of Black Dragon. Seems pretty good, they're pretty strong right?

Wow that is incredible! Welcome to the leaderboard :D

There are an impressive amount of mechanics (and UI functionality) going on here, especially for a 7DRL-- well done!

I was dying a lot at first but after reviewing your help section (particularly the summary of combat) I was able to keep my armies going longer (still needed to stock up on fresh fodde- err-- farmers every few rounds. In the last game I played I died to a herd of rhinoceroses, which was a novel strategy gaming experience.

1) It was sometimes difficult for me to distinguish between my units and the enemy units when they were the same type. I may have been missing a UI tip, but it would be cool if there could be some kind of visual indicator on the map to distinguish friend from foe (maybe a red box around them or something)?

2) I almost instantly grokked the darkened FOV as moveable tiles, but it's still a little non-standard to shade out places that ARE possible for you to move/attack. Maybe there could be a green overlay instead of a black one to indicate possible choices?

3) A field for how many days you have left before you run out of rations would be nice for those of us who are lazy and don't want to divide the amount of rations by the number of rations consumed daily.

I'm not sure how many of these were updated in the next version. (Very cool that you already have that out already, btw).

Overall, a fun condensed strategy roguelike that reminded me of MoM and Conquest of Elysium. Thank you!

Thanks a lot for playing and taking the time to write this up!

"died to a herd of rhinoceroses, which was a novel strategy gaming experience" - LOL

The feedback is on point; I spent way more time with map generation and AI than I intended, and didn't get to polish the visuals as much. The next version added a "Side" to the info sidebar letting you know which side the unit belongs to - certainly can do better, but it's a start. The biggest update in 0.2 is really the balancing - I didn't get to test it enough during 7DRL itself, so 0.1 turned out a bit tedious to win.

Oops, I posted this on the devlog by accident.

This is super deep. Nice work. I played it a bit and enjoyed it but I really need to sit down and dig deep. A short quick start guide to the UI might help actually. Great work!

It occurs to me now that the devlog is kinda a guide of how to play, so thanks for that. I am not familiar with Heroes so it helps. Oh and I just read that you have a help menu too. Dang nice. Gonna dive in again sometime soon

Yea ok the in game help explains it all pretty well. Now to figure out how to actually do well

Thank you for encouraging words! Indeed the game help is meant to be the in-game manual. As for doing well, I didn't have time to playtest it enough so there is a good chance it's not balanced - would appreciate any feedback! 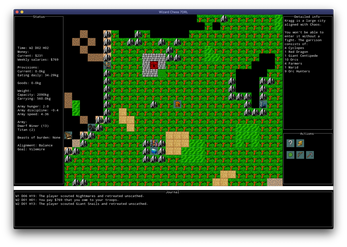 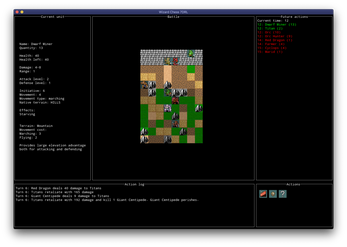 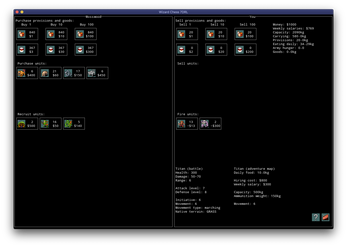