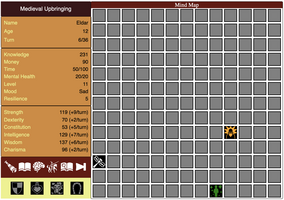 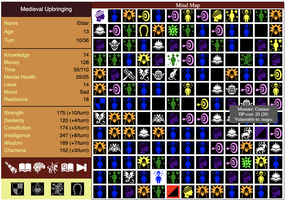 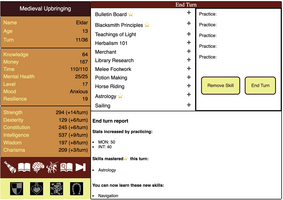 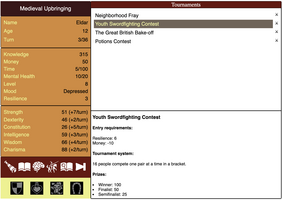 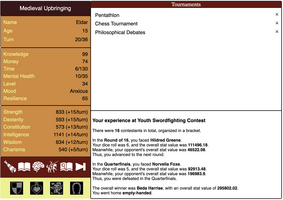 And so, 7DRL 2021 has come to an end. Just like last year, I had an ambitious vision (aka "overscoped"), took a week off work to implement it, and ended up cutting out some features to finish by the deadline. Still, I think the final product is quite fun and addictive, and I am excited to see players engage with it!

The game is greatly inspired by a Chinese childhood simulator Chinese Parents - it inspired the name loop of the game: develop stats on the Mind Map, study new skills, and then choose what to practice at the end of each turn. That said, I've added a ton of original mechanics: Tournaments, Mind Map monsters (aka "inner demons"), special powers that affect monsters and tournaments, and other interactions between these components. I also cooked up a tree of over 100 medieval/fantasy skills to explore.

7DRL veterans encourage participants to have the game idea fleshed out ahead of time, so they can utilize the 168 hours set aside for the jam to the full extent. This year I probably overindulged in this suggestion, and spent countless hours planning mechanics and skills, learning javascript/css, and researching free game icons to see what kind of visuals I could expect. On one hand, this seems somewhat in line with having a pre-made engine, but overall I find the idea that I could make this game from scratch in a week kinda laughable.

Any person who's dabbed into the world of Roguelikes is familiar with the perennial argument about what really counts as a roguelike. While rating the 7DRL games last year, I realized that I care about some features much more than others. For example, I absolutely require the game to be turn-based, but care much less about permadeath and procedural generation (i.e., I'm happy to play an otherwise-traditional-rogulike with prebuilt rooms). Another feature that I really enjoy is the richness of content - the exploration of "what else is out there?" is one of my primary drives in playing.

So, Medieval Upbringing is probably not a Roguelike in some people's eyes (where the hell is "@"? Where is the numpad movement!? WHERE ARE THE WALLS I CAN HIDE BEHIND, PLANNING MY NEXT MOVE???) - but it includes the features most dear to me in a roguelike. It's absolutely turn-based. It requires you to plan ahead on both micro level (which cell on the Mind Map do I unveil next to maximize my chances of XYZ?), and macro level (which skills should I practice to make sure I can learn this skill 3 turns ahead?). Every character starts with a profession that unlocks a unique skill subtree, so the game can be replayed multiple times with a relatively new flair. It even features a skill called "Rogue", you guys!

One feature that I spent unexpectedly large amount of time on were Tournaments. The original plan was to have Tournaments as a tactical decision-making minigame (maybe even a traditional roguelike within the game!), but I quickly realized that this would take up the rest of the week, and I would likely fail miserably. So instead I turned a Tournament into a comparison of stats (compounded by relevant skills) between the player and the other virtual inhabitants of the player's world. There is also a dice roll involved to introduce some randomness and let underdogs prevail from time to time.

For example, in a Swordfighting Tournament, we could take 5x the strength, 4x the dexterity, and 1x the constitution, sum them up, multiply the value by 50% if the participant studied "Swordplay", by another 50% if they studied "Expert Swordplay", and by another 20% if they studied "Parrying", and roll a single dice to add/subtract 50% from the resulting value. Each pair of fighters goes through this process, and the participant with the higher value advances to the next round - and so on til the finals. I ended up making two types of tournaments: bracket-based, with 2^K competitors split in pairs, and absolute placement, where everyone just rolls the dice once and the highest value wins. For instance, Chess and Swordfighting are good examples of bracket-based tournaments, but Pentathlon and Potions Contest are absolute placement.

The main difficulty with this model was in generating believable opposition: I wanted a model where the player can predict the results of the competition, but it's not just a hardcoded "if your strength is over 2000 and you have this skill, you win". I ended up generating a population of 5000 citizens, each of them of different age and talent level - and their stats and skills are a function of these parameters, plus some randomness. Then, for each tournament, we pick the most qualified citizens that will compete against you. This way, your competition is consistent within a playthrough - if you go to a Blacksmiths Competition and get your ass kicked, you know what stats / skills you need to have a shot at winning next time (the game tells you your and the champion's function values). I tweaked the maximum stats of these citizens in a way that in my playthroughs, I could start winning the tournaments aligned with my skills, but only towards the end.

One of the persistent requirements I have for my games is a leaderboard - a way for people to see each other's results and have some friendly competition. Considering that roguelikes are inherently single-player games, but I personally enjoy competition, I cram these leaderboards in every game to create some level of "social" aspect.

Medieval Upbringing has possibly the most advanced metrics collection I've done so far - the game lends itself well to tracking statistics, and currently sports a table of 7 meaningful metrics to sort by. Moreover, there are tons of built-in achievements ("win this tournament", "defeat this monster", "learn this many skills", etc.) which hopefully will enhance the experience. (Unfortunately, the presentation of achievements is rather meh - a browser alert telling you of getting one, and a dry list hidden in Information.)

Thank you for reading this far, and thank you for playing - if you have feedback to share, or just want to post the screenshot of your final achievements - please do so in the game comments. Cheers <3