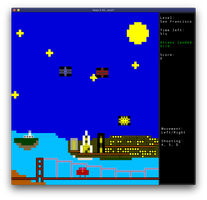 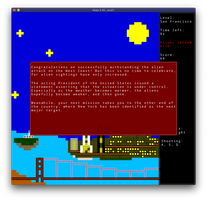 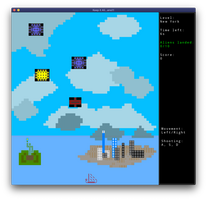 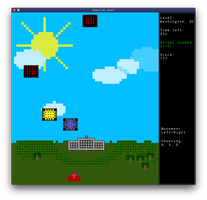 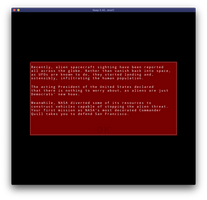 I wanted to participate in Ludum Dare 46, but didn't have enough time to work on something large. So instead I decided to quickly assemble a UFO shooter with ASCII graphics.

The first issue with the plan was that I have only made games with Clubsandwich (https://github.com/irskep/clubsandwich) framework, which itself is a wrapper around BearLibTerminal. It's meant for roguelike games, which never reach the intensity of real-time shooters. But I didn't have even several hours to research a new framework, so just stuck with it anyway. If it doesn't work, it doesn't work, I told myself. Spoiler alert: it kinda worked. At least on my machine, it seems to run at expected 72 fps without overloading the CPU.

Framework had another issue that I did not originally anticipate, and eventually failed to get around. BearLibTerminal (I assume) does not handle simultaneous input well, specifically it doesn't register a keypress when a new key is pressed while another one is held down. This doesn't matter in roguelikes, but is kinda cringy in a shooter, where it prevents the player from moving and shooting at the same time. As a result, you'd have to alternate between movement and fire when playing "Keep it Ali...ens!!!".

Yet another painful experience was the relationship between smooth movement of game objects and the text size. For spaceships' movement to appear smooth, I had to pick a small tile size (6x6 pixels) - otherwise they'd be moving by too much in each increment. Unfortunately, this tile size also defines the default size of the font being used. BearLibTerminal lets the user load multiple fonts and use them as they please, but this doesn't seem to play too well with Clubsandwich, so I had to use some weird workarounds.

Another issue was sketching three backgrounds (San Francisco, New York, and Washington DC) in ASCII form. My art skills are very rudimentary, so even a great tool like REXPaint (https://www.gridsagegames.com/rexpaint/) was doomed to not yield good-looking results in my hands. That said, I'm pretty happy with how these scenes turned out.

Finally, the name of the game is a product of the theme of LD46: "Keep it Alive". Frankly, I have no idea what that is even supposed to mean. I just wove the word Aliens into it.

You can see the source of this project on Github: https://github.com/eldarbogdanov/keep-it-aliens