Sounds very promising!
I really dream of a TBS roguelike.
Unfortunately, this page made my macOS system freeze shortly after starting the game.
Safari 15.4

Hey there - thanks for the report, and sorry for that crash!

I just tried a playthrough on Safari and could not reproduce it :|  Have you by any chance tried a second time? If you do end up trying, could you have the developer console open to see if it prints any errors?

That said though, I noticed that on Safari the game has some other unexpected behavior (like, wiping out local storage when the browser is closed, which would delete all the progress). Until I get to the bottom of this, if you're open to a different browser, the game's been tested in Google Chrome and there it has been stable.

Thanks for the reply!

To add some details: what happened is that I started the game, left it for a few minutes, MacBook screen turned off because of inactivity, and then the game music started to stutter more and more.
I tried to wake the system up, but it lagged so heavily that I had to power the device down.
MacBook was off the charging cable, working on battery.

I'll report if will be able to replicate that.

Yay I beat it! It's a really interesting game. I definitely think it would've been a lot harder to ramp up in it if I hadn't played Wizard Chess 1 a lot as well.

I like how over the course of the game, the value of resources changes. At first money, growers, shops are the things you want to go for but by the end I only cared about triggers and easier fights.

I don't know how I would be able to beat the game without the Precise bonus which gives +1 range to my ranged units for the first 40 turns. It made so many fights so much easier. I kept choosing to the swamp terrain because then I could just position my ranged units in the middle and just pick off any enemies that tried to approach. Late game must be a lot harder without it 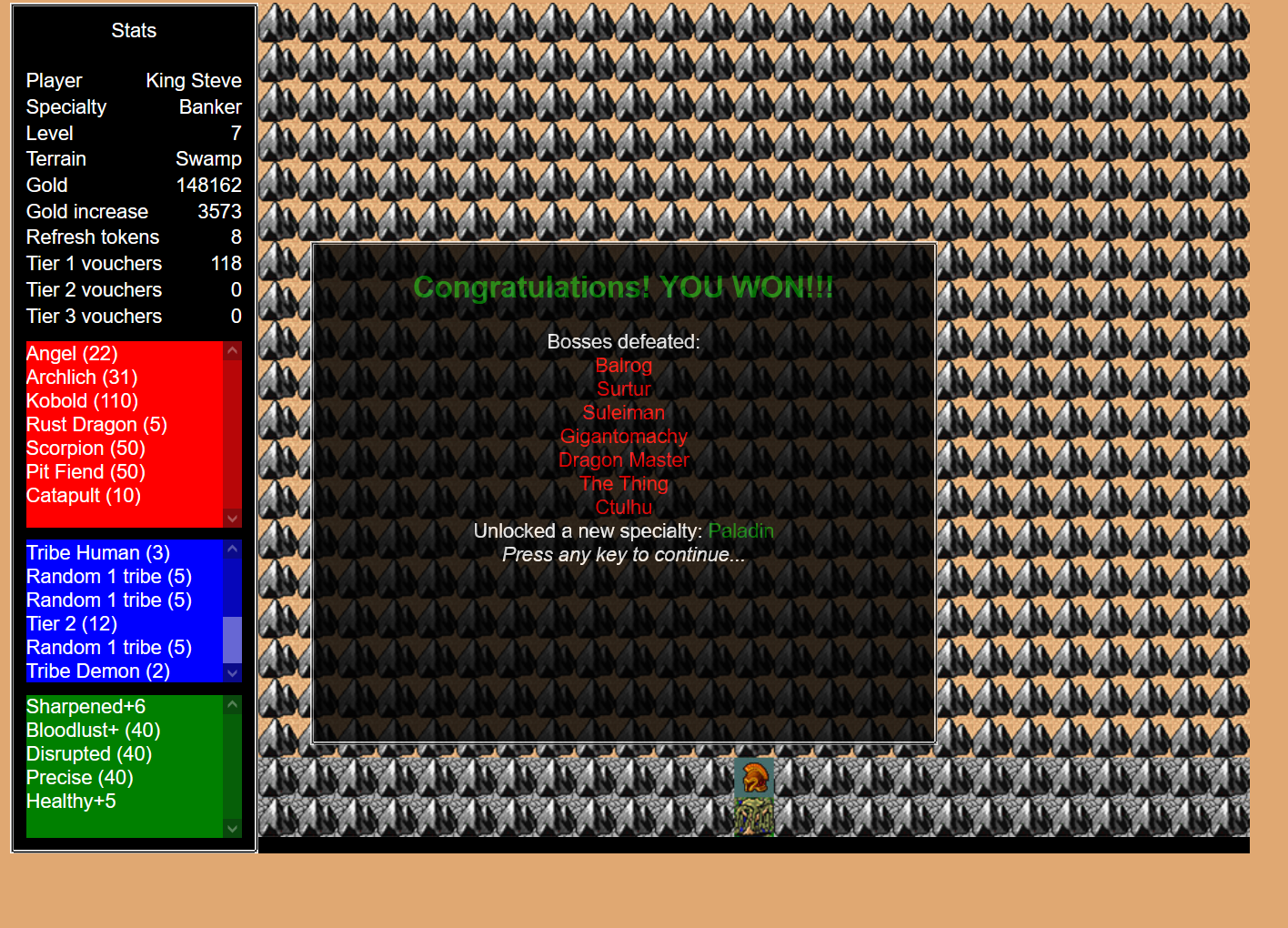 That is one massive army! ...and a lot of army growers :o

Yay, thanks for playing!!

Precise+ranged units (+Slow blessing :P) is just one OP combo that could get you a win. Looking at your army, it probably didn't even matter by the end because you had so many melee strong units. For instance, getting an early Angel/Balrog/Roc and a corresponding tribe army grower, or getting a Fly blessing and fighting on slow terrains (like Swamp) should get you quite far.

I liked the game but i found it a bit overwhelming and difficult to understand at times, i dont usually play these types of games but overall its on its way to becoming a great project!

Thanks for playing! I agree the game is somewhat niche and overwhelming :)

I like the leaderboard, and the concept, buuuut this is far from finished. Movement indicators would be helpful, an actual tutorial, I lost interest quick because I didn't know the goal.

My suggestion would be to remove the "world map" and replace it with a selection screen for which enemies to fight and the rewards because that's the only options given by the world anyhow.

Now, I still like the concept, and the combat, except for the occasional glitch where I cannot select the enemy unless I move my mouse a bit, is enjoyable. There is a lot of potential with the emphasis on positioning.

TL;DR: The game is fun at times but it does not do a good job of informing the player

First of all, thanks for playing and taking the time to leave feedback!

Regarding not knowing the goal - which of these (if any) do you mean?

Good point on the world options really just being a enemy/reward combo - I found some charm in having it as an explorable map, but perhaps it feels tedious and obsolete at times.

It has been a while since I played this (a month) so I don't remember everything but I jumped into the game just now and it is definitely better than when I last played it. Maybe I missed some text last time but the combat feels a lot nicer and is easier to follow. I had no idea about the help screens, I should have more thoroughly read the description. The only issue I had with the map is there isn't anything to do in it other than move to the next fight, but I definitely see the appeal of having an explorable overworld.

TBH my biggest gripe is solved with the main menu's "help" screen, which if I remember this didn't have when I last played it.

I believe I only changed behind-the-scenes stuff like unit balancing, number of tiles per level, blessing percentages, etc. - but it's been a while so perhaps I tweaked the main menu help screen without remembering! :)

Either way, thanks for coming back to it - if you end up playing more, post your impressions!